And the new Premier of Ontario is……….likeable? 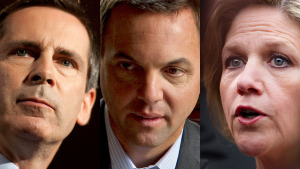 The provincial election in Ontario is a little over a week away and depending on which poll you believe anyone of the three main parties could end up winning.

But if it came down to backyard barbecue invitations instead of votes NDP leader Andrea Horwath would be the winner with 37% of respondents to an IPSOS Reid poll saying they would prefer to have her than 32% for PC leader Tim Hudak and 31% for Liberal leader Dalton McGuinty.

With all three leaders so closely matched it's the emotional attribute of Horwath that makes her more appealing than the others.

If you had asked in the same poll what words people would use to describe each leader the chances are a few would come up for all three such as;

If all three posess the same words then these are what we term rational attributes – i.e. they are what we expect to see in any leader of a provincial party. They are the table stakes, they get you in the game and seriously considered.

However – they will not be the deciding attributes in why someone will vote for them. The differentiators are the emotional attributes – such as Likeable.

When you are communicating your personal leadership brand be sure that both the rational AND emotional words are included in your language – written and verbal – it's critical to your success.

1 thought on “And the new Premier of Ontario is……….likeable?”