Paul Allen – Idea Man – a memoir by the co-founder of Microsoft. 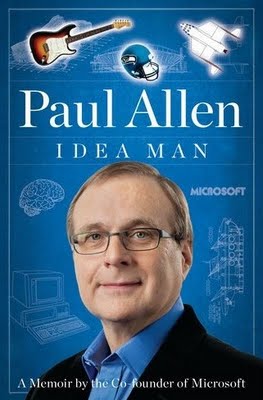 From this book you will learn:

Paul Allen is certainly best known by many as the co-founder of Microsoft, who left in the early 1980's but still wound up a multi-billionaire. Many might also choose to pick up this book to find out the insider scoop on what really happened in his 'fall out' with Bill Gates. Certainly the publishers have positioned this book to portray these very two renowned key points.

However there is much more to this autobiography than just dishing the dirt and making billions from Microsoft. It could be argued that Allen has had more influence across a wider spectrum with his various successes and failures since, than an ever lasting impact with what remains of his legacy inside Microsoft. After all how much of Allen's work or influence even is in what the company is now – over 35 years later?

What was more insightful was Allen's ability to think ahead of the technology curve (and beyond tech.) in a number of ways. This is more where the title "Idea Man" comes in to play – he invested, in some cases more closely gambled, on technology such as streaming content, wireless technology, consumer space travel. Some proved successful, others failed, but likely more from being too soon than completely wrong.

The book can appear in places dry (read – too much technical information that may not have been needed) and although you learn of the trappings that wealth brings – yachts, sports teams, playing guitar with Bono – you certainly also understand Paul Allen to be a very private man, close to his immediate family but you learn little of his own personal life – something in an autobiography is lacking.

Overall an interesting insight in the personal brand leadership of a technology titan, a community leader and philanthropist and some interesting lessons about business.

About the Personal Brand that is Paul Allen; Paul Allen is the billionaire technologist and philanthropist who started Microsoft with Bill Gates. He is founder and chairman of Vulcan Inc., the company that oversees his business and philanthropic activities.

Allen started Microsoft with Gates, a childhood friend, in Albuquerque in 1975. He was the company's chief technologist until he left in 1983.

Since then, Allen has become one of the nation's leading philanthropists and continues the search for knowledge that led to the creation of Microsoft. Allen's multibillion dollar investment portfolio includes a major real estate redevelopment in Seattle's South Lake Union neighborhood and holdings in dozens of technology, media and other companies.

In 2004 Allen funded SpaceShipOne, the first privately-backed effort to successfully put a civilian in suborbital space, winning him and designer Burt Rutan the Ansari X-Prize.

With lifetime giving of more than $1 billion, Allen has also pledged to leave a majority of his estate to philanthropy. He gives back to the community through the Paul G. Allen Family Foundation, whose goal is to transform individual lives and strengthen communities by supporting arts and culture, youth engagement, community development and social change, and scientific and technological innovation.

In 2003, the Allen Institute for Brain Science was created with a $100 million commitment from Allen. The Seattle-based Institute is an independent, nonprofit medical research organization dedicated to accelerating our understanding of how the brain works. The Institute takes on projects at the leading edge of science—far-reaching projects at the intersection of biology and technology. The resulting data is available, for free, to researchers worldwide.

Allen is also founder of Experience Music Project, Seattle's critically-acclaimed interactive music museum; the Science Fiction Museum and Hall of Fame; and the Flying Heritage Collection, an assemblage of rare World War II aircraft restored to flying condition and shared with the public.