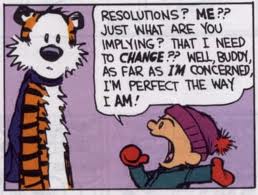 As part of the continuing theme "Review Your Year With No Fear", there is still time to review 2010, just e-mail me paul @ paulcopcutt.com and I will send you the first three lessons. The final lesson comes out in a few days and is more about looking forward to 2011, so I thought that this article, written by colleague Jamie Broughton of Footprint Leadership, was a great lead in to that whole subject.  Make one of your resolutions signing up for his regular newsletter, its one I always read.

"Plans are only good intentions
unless they immediately degenerate
into hard work"
~ Peter F. Drucker (1909-2005)
"The Father of Modern Management"

"CLANG!!" went the piano keys in a loud and forceful way.

"Arrrrgggh!!" bellowed my daughter Sam from the basement.

I looked downstairs to be greeted by a stern look. Her arms were squarely crossed in protest and her brow deeply furrowed in an 'you'll never make me!' look.

"I'm SO frustrated. I'm not doing these stupid scales any more. Why do I have to do them?! They are SOOO boring. I want to play Ode to Joy instead!. Arrrrggh, I just wanna quit."

Sometimes with just as much fanfare as Sam likes to demonstrate.

If you haven't yet given up on it, planning for the New Year can be fun.

You know, you get a bunch of friends together, serve copious amounts of snacks and refreshments, do a little reflecting/celebrating (let's call it 'the New Year's bash', shall we?) and drunk with love, optimism, champagne or any combination of the above, we proudly declare our resolutions for the coming year.

We wake the next day with a furry tongue, bloodshot eyes, and a commitment hang-over, hoarsely wondering, "what the heck did I commit to last night?"

Thirty, sixty, or ninety days later, we're slinking around hoping people have forgotten about a) what a cheap drunk you were and more importantly b) your commitment(s) for the year.

Alcohol and joking aside, the New Year does ring with optimism, hope and possibility. And it's that sense of possibility that makes pondering 'what I'll do this year' (or planning in general) at least, tempting.

But there it often ends.

Planning is all about opportunities while execution deals with limitations. Planning and strategy is about possibility. Execution is about accountability. Possibility is fun and liberating. Accountability, er, not so much.

The problem of course is unexecuted plans, fun and sexy as they are, aren't worth the paper they're written on.

While there are lots of worthwhile aspects of planning you're likely familiar with, here are a few keys that dramatically increase the odds of executing on your plans for 2011 (for real).

Consider selecting only one or two CORE objective(s) and having 'optional', if-I-get-to-them, ones. When the inevitable crunch of time, money or energy comes, you need a clear idea of what's most important. "He who chases two rabbits catches none" goes the old Chinese proverb.

Core structure. You need a framework, a foundation.

At the center of any worthwhile project there is the 'heart of activity'; the core stuff that just has to happen and regularly. It's rarely sexy but you know it's critical: call two people a day, no email before noon, write for an hour a day, eat breakfast…do my piano scales first, etc. What's the central activity your core project/goal hang's on?

Accountability. It's ok, we all need it.

Admit it, you'll take the easier route if you can, you're human. Studies have shown your odds of completing a task almost double if you commit to another (sober) person and set up a time to follow up on your commitment. Who can support you in what you're up to this year? Look for someone who cares about you but won't put up with your excuses. Set up a regular time to connect.

Have a wonderful and prosperous New Year!

Jamie Broughton is one of those premier executive coaching types. He is the founder of Footprint Leadership and author of The Emerging Leader: Identify, Ignite and Retain Your Company's Next Generation of Leaders. It's won a pretty big book award and been endorsed by a bunch of cool folks and best-selling authors including Stephen M.R. Covey.  For over a decade, he's specialized in helping organizations get the best stuff from their promising leaders, fast. He's also a cycling fanatic and spends too much money on bikes.