The 7 Signature Signs of Jimmy Savile – An Original Personal Brand 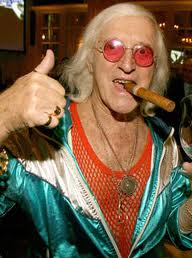 It was sad to see the news earlier this week of the passing of Jimmy Savile, two days short of his 85th birthday, a truly authentic if slightly eccentric personal brand.

Many years ago my aunt experienced a stroke and was in Stoke Mandeville Hospital in the UK, world renowned for it's work in spinal injuries, but also a hospital supported and visited on a regular basis by Jimmy Savile. We happened to be visiting one weekend when he was 'doing his rounds' as a volunteer porter and experienced first hand his overwhelming generosity, humour and uniqueness.

Apart from his core attributes, he had many ways that he exuded his brand that were signature to him and made him perhaps one of the early authentic celebrity brands.

And like any star struck young kids, we also got him to sign his autograph, which again was unique with a happy face in the circle round of his 'J', the 'S' was a dollar sign and the 'L' he made in to the pound sign.